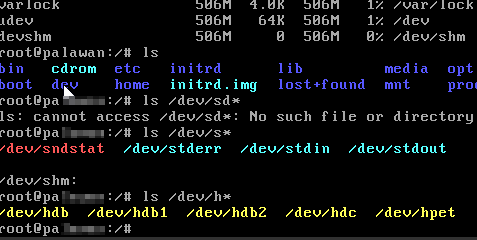 After converting a couple of legacy  Ubuntu 6(!)  VMs from ESXi vmdks to qcow2, in Proxmox I setup the vm guests and chose the SATA interface for the qcow2 images.

During boot up, grub was showing the error

And after a minute or two waiting.

and eventually it dropped into Busybox and unable to boot.

Then when you get dumped into Busy box again, you can now list the disks and partition names using ls /dev/h*

In the following example, the partitions were assigned as /dev/hdb /dev/hdb1 and /dev/hdb2 by Ubuntu.

In my case, the root file system has changed to /dev/hdb1, so all I had left to do is

Ubuntu will be able to find the kernel and complete the boot. But you will ended up in recovery mode and need to patch a few of things before rebooting properly the next time:-

In the next reboot, your Ubuntu VM should find the root device and will boot up normally.

I found myself in a similar, but a more difficult situation again.

Using Clonezilla, I was cloning a VMWare Workstation VM to a Proxmox VM over the network using server-client mode.

After cloning, when I tried booting the Proxmox VM, the disks are not available, I was unable to see any disks even in recovery mode, neither with sata or scsi on Proxmox!

A helping tip https://www.linuxquestions.org/questions/debian-26/booting-to-initramfs-gave-up-waiting-dev-disk-by-uuid-xxxx-does-not-exist-4175585901/ showed me the way.

Afterwards the cloned VM was able to see the drive and became bootable. I guess by chroot the mounted partition and updated the initramfs did the trick.

You may have to fix the swap partition as aforementioned if necessary.