A couple of weeks ago, I was lucky enough to be on site to play with a HP ProLiant DL380 G7 rack server.

The server was souped up with 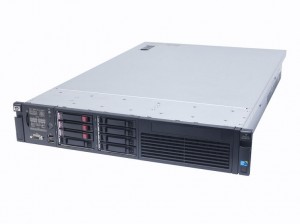 The reason for the overkilled specification was that – the server was meant to run Microsoft Windows Server 2008 HPC and will be hosting half a dozen of VMs using Hyper V.

The first task, as with most HP servers, is to slip in the HP Smartstart CD to use the OS installation wizard. This is where most sysadmins would stumble – because the Smartstart CD (version 8.50) does not have the option where you can select  to install “Windows Server 2008 HPC”, and if you attempt to choose, say, “Windows Server 2008 x64”, eventually you will face with an error of “driver not found” or similar kind.

Our immediate workaround was to insert the Windows HPC installation CD directly and reboot the server to install it. This looked working until near the end of the installation where Windows is configuring the setup – after a few long minutes, eventually a dreaded error pops up that says: “Windows could not update the computer’s boot configuration. Installation cannot proceed.”  Workaround Failed! 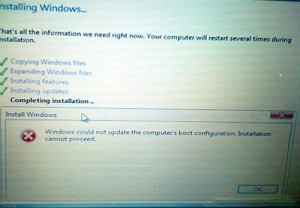 Without phoning HP, a quick Google search took me to a solution.

It is possible to install 2008 HPC directly from the CD without using the Smartstart CD.

The main steps are:

This step is an easy one – it is simply hitting F9 when you see the BIOS screen, and it is under the Advanced Options.

In order to get into the Raid configuration menu, first you boot up the server as normal, and you shall reach the BIOS screen that looks something like this 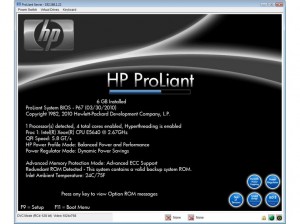 It is right at this point, you should begin to hit the [F8] key repeatedly – not too fast as to overfill the keyboard buffer, but hit it once every second to make sure that the server acknowledges it.

Once you are throught the BIOS screen  you will see the next black screen where the BIOS inform youto hit [F9 for setup] , [F10 for …] and [F11 boot menu] etc.. Just continue pressing F8 once every second..

Now if all goes to plan, you will then reach the hidden OCRA (Raid controller) menu!

You will need to perform the following steps while inside OCRA:

This will re-initialise the disk array and the logical drive as brand new. Once done, simply exit and reboot the server.

You will now be able to install HPC directly from the installation CD and no special drivers are required. Once HPC is installed and the server is up and running, don’t forget to:-

Good luck and I hope you will enjoy HPC on the DL380 G7. It runs like a dream – if only I can have a server like that at home!