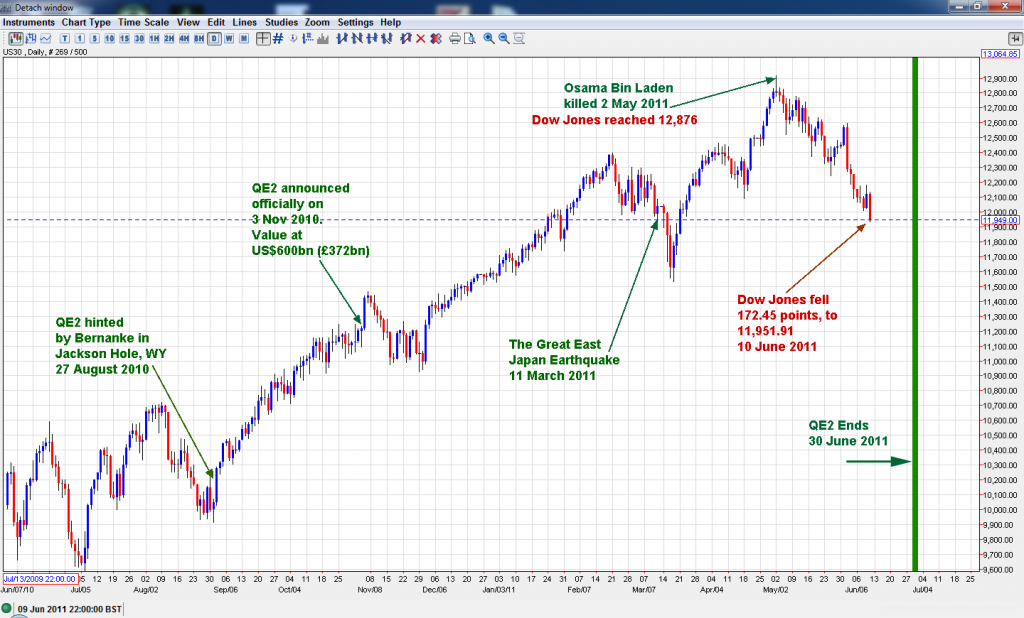 Economist Martin Feldstein argues that the expected 2nd Quantitative Easing (QE2), hinted by Ben Bernanke in August 2010 and announced on the 3rd Nov 2010, led to a rally in the financial market which in turn contributed to increasing consumption and the strong performance of the US economy in late-2010.

QE2 has been responsible for a dramatic stock market gain thanks to the Fed, putting the impact at 4,000 Dow points since it started intervening, and 250 points of the S&P 500 rally since late August 2010 – Nomura Securities’ Bob Janjua estimated.

For some observers, the objectives of QE2 have been met when measured by the lower yields on long-term US Treasuries, the easing of lending conditions and a rise in inflation expectations.

“We have seen increased evidence that a self-sustaining recovery in consumer and business spending may be taking hold.”

Participants at the Reuters 2011 Investment Summit said a QE3 was unlikely because the US economy was showing signs of growth despite a slew of weaker economic numbers, and the US economy could stand on its own, a Reuters report from Thursday showed.

The question is how will the US and UK equity markets respond in the face of higher unemployment, soaring public debt level and a weak housing market – which is a continual trend that economists say may last for a few more years.

With the current international backdrops of the Middle East political tension affecting Oil prices, China’s rigorous tightening of their money policy, and the contagious European Sovereign Debt Crisis, growth is hampered in short to medium terms.

During QE2 – There was little risk to borrowing (and deploy that capital into the stock market or commodities) as it was clear that the Fed and the Bank of England was putting the interest rates in-check. With that risk-guarantee now off the table, shrew investments will move the “fast earned money” to new opportunities.

QE2 is scheduled to complete at the end of June. A repeated QE implementation is merely a partial, monolithic approach to the current economic predicaments. It is not a solution and could undermine and limit the scope of future exit strategies.

Put it simply – how do you end it?