Having his past timeline altered and was shown his own past, present and future by the Doctor and Amy, Kazran had to confront a hard moral choice – he could either let a starliner to crash land and the 4003 passengers on board would perish, or he could choose – as a redemption – to release his love-frozen Abigail who has one last Christmas left to live.

Though it was not explained to Amy (and the audience) and Moffat has left the episode open-ended, I would like to believe that the doctor, as a Christmas goodwill gesture, had secretly and subsequently re-written Abigail’s timeline to remove her terminal illness, in order for her to reunite with the now-reformed Kazran for Christmas day and beyond.

Moffat promised a heart-warming, “Dickens’s like” Christmas tale and he certainly did not disappoint. Broadcasted at primetime on Christmas day, the episode was tailored for family orientated viewing interwoven with romance, humour, the doctor’s timey-wimey, CGI shark and spaceship, rich vs poor, a tale of moral and choices vs cruel and kindness, Katherine Jenkins’ TV debut and her angelic singing, and of course — the joy of more snow!
Thank you very much BBC and the DW team for giving me a beautiful episode as a Christmas present.
Hope you will enjoy it as much as I did and let’s see if Stetson are going to be cool in the new series!
Tech note: 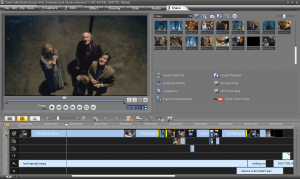